Haha, I've never done that celebration before I don't think...probably because when I score, I'm never going fast enough for it...I play the game with a shovel though, so...
Top

I took about 3 or 4 strides into a rebound that made it to the bottom of the circle, and had to make a split second decision on where I wanted to go after that haha
Top

1T finish? Like a puck bounced out to the circle and then you pounded it in short side, one touch eh?
Top

I'll never understand why people sandbag in any capacity. It's supposed to be a D league tournament. We've played two teams that should be high C at best. We're definitely, solidly a D league team and we just can't keep up.
Top

I'll never understand why people sandbag in any capacity. It's supposed to be a D league tournament. We've played two teams that should be high C at best. We're definitely, solidly a D league team and we just can't keep up.

in my experience adult tourneys are always a crap shoot. I know guys that are solid B level, maybe even A level who will register in a much lower division just so that can play drunk/hungover and not get pasted.
Top

Couple dudes who played collegiate as well. Just frustrating when theres no lower level to play in.
Top

You should recruit meow for your goalie...
Top

We could've had Patrick Roy in his prime in there and we might've given up 30 instead of 42. Our goalie wasn't our issue
Top

Where is meow, by the way? One of you kong donkeys didn't scare him away, did you?
Top

Couple dudes who played collegiate as well. Just frustrating when theres no lower level to play in.

You said this was for the Labatt tournament? That sounds about right.

I placed in it years ago when it was still at Airport Ice and it seems like every team played down except ours and one other team.

Our first game had three guys who played juniors (overhear it during the faceoff with one of them saying 'well that's where they put us') and toyed with us after going up like 5-0 halfway through the first. Another game was half a team of Pitt club players. We ended up getting stomped something ridiculous, like 12-0 or 14-0. Third game, we figured we had a chance. Team from Niagara Falls, all 40+, all hungover as ****. They were willing to forfeit because half of their team didn't show. We told them don't worry about it, we're just here for fun. I want to say they had one sub on the bench. They beat the wheels off of us and it was never even close. It too was a double digit loss.
Top

my team won our league championship last week. we won it in OT. I had the tying goal with less than 5 minutes left in the 3rd. definitely my biggest beer league goal.

first Cup win in our new jerseys and yes, I picked out the color scheme. 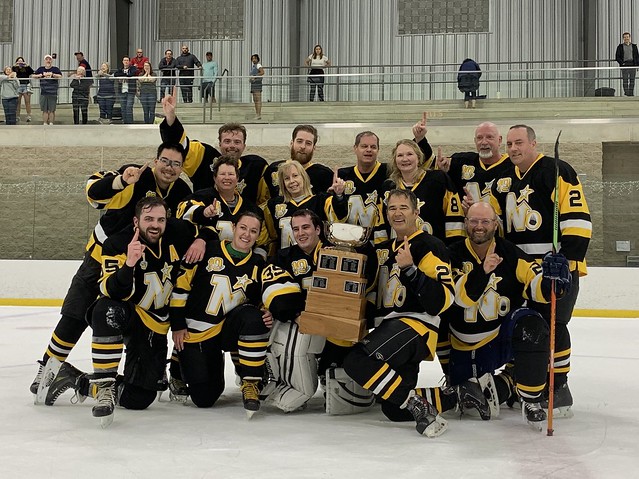 one of the league's goalies is a glass blower and he makes these really nice glass pucks for individual trophies. 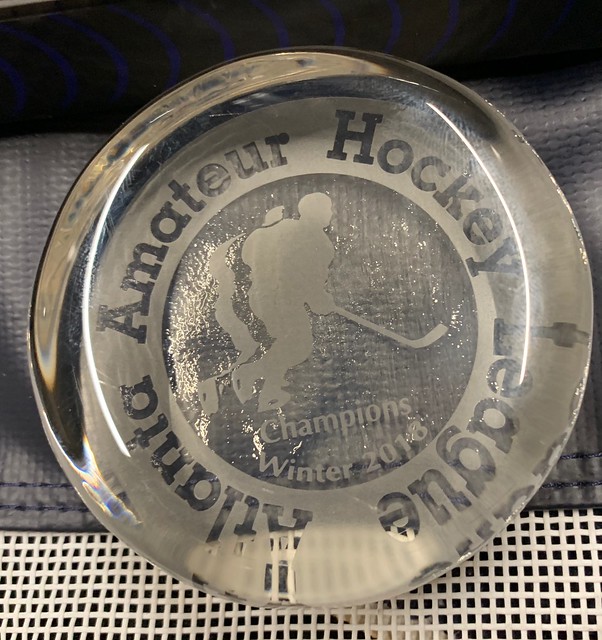 Got tied up with someone and chipped a tooth. God dammit

I wear a shield but now realize that a cage is love, cage is life
Top

Stick get ya?
Top

I think. This dude and I sort of havw a history. We've played pick up a lot of times over the last few years and I thought we were cool but last year in a league game he took a bunch of runs at me. I got pretty hot but nothing happened

Since then he's been fine and after it happened he was pretty apologetic. The situation itself was pretty trivial...I was receiving a pass while entering the zone and he was right there. He took the worst of the hit but I think in the process his stick came up and got me
Top

I’ve probably mentioned this before, but I played one game in my life without a full cage and it was terrifying. People are way too careless with their sticks; always something near the face. All the dented, scratched, and mangled cages I’ve worn throughout my life could have been my money maker taking the beating instead. Don’t know how guys do it night in and night out.
Top

Still don't play with any facial protection, no visor, no cage, no fishbowl, I don't like a mouthguard...it's not logical, but that's the way I like it...
Top

I don't use a mouthguard either. I don't have much to lose, tho.
Top

I mean, they're very different things...for instance, one of them you can just chew on during games and have it do nothing for you...you'll never guess which one...
Top

well yes, you are an idiot for no cage or fishbowl

but if you're going to get a mouthguard I highly recommend these:
https://www.impactmouthguards.com/

the company is owned by one of my buddies. custom mouthguards at an affordable price. he's made a few for me and it's the only mouthguard I've ever thought was comfortable.
Top
Post Reply
427 posts

Users browsing this forum: No registered users and 3 guests