Unrelated but Tyler and I might be down at Eagles Canyon that first weekend of June. If he can get his motor back from the shop this week.

My wife looked at me like I had three heads when I said that would be a good shake down for the BSCooper. It make a lot of sense to me, but she's not seeing it. We'll see if it's even ready by then anyways. I almost have enough room cleared to actually get it on the lift...
I need to pull the engine and do the timing chain and guides still. Friend of the hobby shop is welding the cage (which is already cut and propped into the car at least).
Top

At least you're making progress.

Tyler and I are registered for One Lap 2021. Eagles Canyon is one of the tracks we're going to so it would be nice to get some familiarization on it. That's the only reason I'm considering going, 20 hour drive each way.

Also unrelated, my SRT4 is finally roadworthy. Just needs a set of racing wheels/tires and some fancy pads up front and I'm set for the track.
Top

Yeah, the track has a PDE the first week of June I am eyeballing.
Top

So I've mentioned my dream is a non-descript 80's Indycar that ran at the Speedway but other than that is completely forgettable. Well, I still haven't got the $60k to do that. But in searching the SVRA classifieds there's an ex-Davey Allison T-Bird converted to a road course car for $25k. That's tempting as all hell, Davey was my stock car hero growing up.
Top

My wife looked at me like I had three heads when I said that would be a good shake down for the BSCooper. It make a lot of sense to me, but she's not seeing it. We'll see if it's even ready by then anyways. I almost have enough room cleared to actually get it on the lift...
I need to pull the engine and do the timing chain and guides still. Friend of the hobby shop is welding the cage (which is already cut and propped into the car at least).

I'm in. Probably going to tow into KC and hit up a hotel. Then tow down with Tyler that Friday. If his Vette isn't ready he will be in the SRT4 with me.
Top

So much for it's too long a tow, lol
Top

Yeah. His car is having issues and I don't trust the two of us not to break the SRT-4, so I need my trailer.
Top

Isn't breaking the SRT a given knowing his track record?
Top

I get super jelly reading you two post about this stuff.
Top

Audi Formula E driver Daniel Abt uses a ringer (a professional e-racer) in a virtual race, gets fired from his real-life race team.

Isn't breaking the SRT a given knowing his track record?

Yes, and since his motor is in the shop still (being picked up today) I don't have any faith in the Vette either. The original idea was for us to run at CMP together, me in the SRT and him in the C4. Then I drive the Z4 to Texas and we co-drive his car. Buuuuuuuut, I backed out of CMP for COVID and he backed out because of the motor issue. So now we both have un-tested track cars. Should be a hoot.

SCCA is also selling a TNiA. So you can buy 80 minutes of track time on top of the TTNT if you want. Sounds like a great way to shakedown a B-spec car.

I get super jelly reading you two post about this stuff.

The AutoClub Speedway event was cancelled or you could've drove with me in that event. The plan was to buy an M6 in California, race it, then drive back to PA. That was in March, though.
Top

What kind of racing do you guys do? In a tldr format, don't waste much time giving me details that I don't understand
Top

I do Time Trials. Three sessions, fasted time/lap from each session gets added together for a total time. You are on track with otber cars but not competing for position, just for time.

CBear does that, but also does traditional wheel to wheel racing.
Top

Well it looks like the SRT made it through the weekend @dodint ? How'd it go? When I noticed they were delaying the Sunday schedule for oil cleanup I thought, "Way to go Tyler." Glad I was wrong.
Top

So that Sunday oil spill was something else. A '90 Honda Civic in Unlimited 2 started blowing oil in the start box for TrackSprint. He put down oil from Turn 3 all the way to pit in, so well over two miles. It took us two hours and 37 bags of Oil-Dri to clean it up. The track crew worked it and a bunch of racers, myself and Tyler included, went out with push brooms to help.

I couldn't be prouder of the SRT-4. Tyler and I co-drove it, so it was doing double duty. Then I added a Track Night in America on Sunday which was an extra 40 minutes of track time. I would come in from Advanced group a few minutes early and go straight to grid and deliver the car to Tyler who would then take it back out for his full session. It would get a break during the Novice session and then the cycle would repeat.
Mechanically the car didn't flinch. Being it was 96F out and it is a turbo it would lose about 5mph at the end of the longest straight when the car was the hottest.
It took a quarter tank of gas every single session.

At the end of the event our time was at 104% of the class leader time, a new Civic Type-R, so I'm very happy with that result. My car is ~15 years older and literally 10% of the cost of those cars so I'm very proud to have wheeled it within a respectable distance. I was leading the Camaro (4T) going into the final session but he found his speed and put down a time I wasn't going to catch, so I missed the podium for the first time since starting these. He was a Novice and new to the series so I'm happy for him to have earned a medal, maybe he'll come back.

The car was so much fun to drive. The Hotchkis sway bar kit really tightened it up a lot. It was super compliant, and actually easier to drive than my RWD BMW. I never lost control because of the vehicle dynamics, you just pointed it into the turn and steered with the right pedal, very cool. That said it's not a forever car, but since I bought RPF1s and new rubber for it I'll keep flogging it until we buy the One Lap car.

I'll put some video up later in the week. Somehow this car is both raw and compliant, much different than the FoST I drove last year. Lots of grins.
Top

And you beat Tyler by a second...
Sounds like fun, did pick up an Expedition EL so I've got my tow vehicle. Now just to finish the racecar.
Top

Since you have a tow vehicle I'll point out that Nelson Ledges has a time trial coming up: https://www.motorsportreg.com/events/ne ... hio-899587

They also just announced a road race on August 1st-2nd. I'll be helping them out with Sound for the road race.
Top

Week prior to Majors at HPT. Either a good shakedown or a chance to blow something up right before I need it

So there I was, having passed him on the outside I waited for boost to kick in so I could handily beat him back to the line: 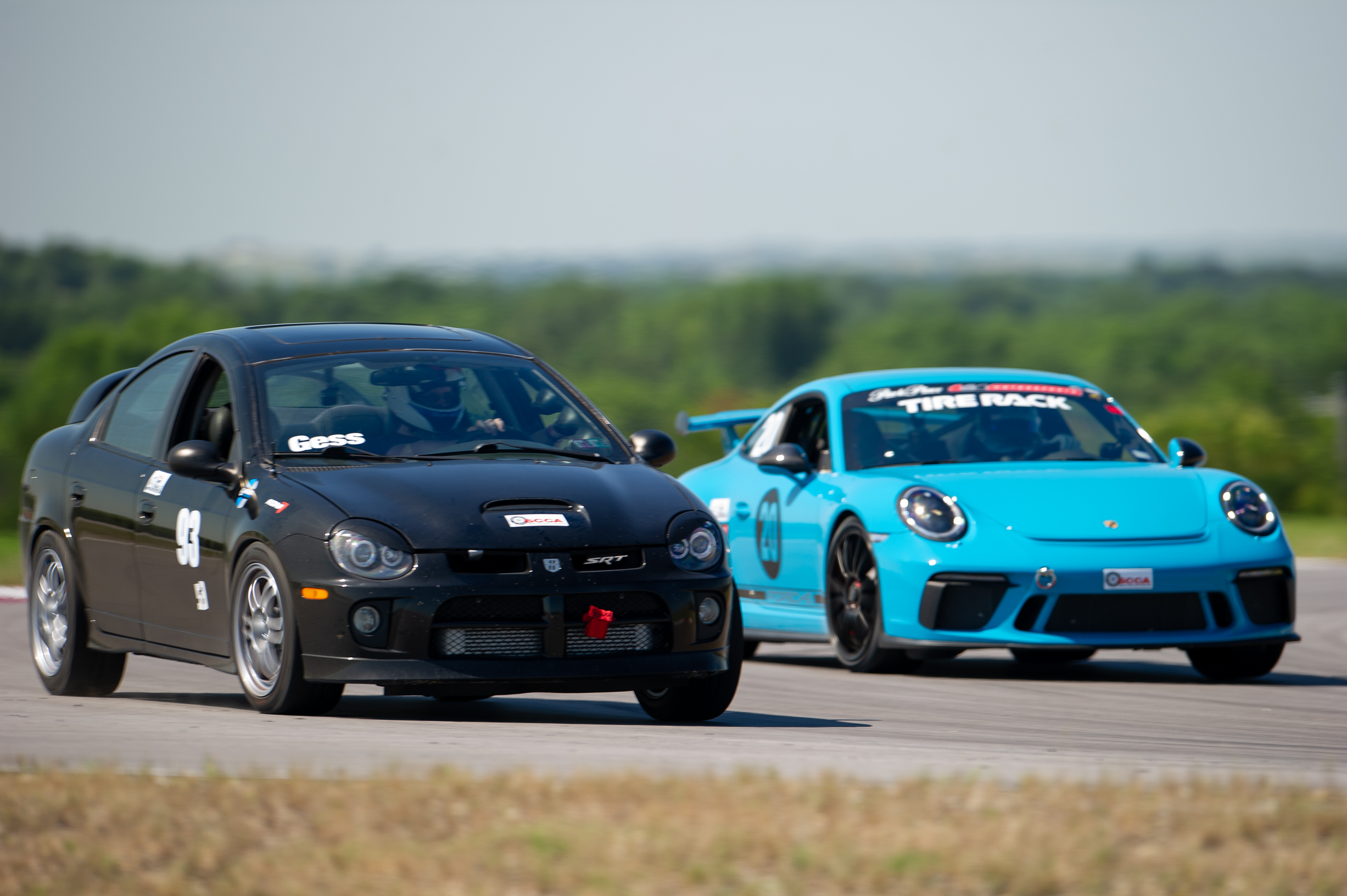 Lol. Did you run with the advanced group?
Top

Yeah. Mostly for point-bys like that, but it facilitated car sharing with Tyler.

Very first practice session I was two minutes late to grid. Right in time to let the whole field by.