Growing up, when we would have to do ancestry reports or projects in school mine was always pretty basic, especially for Western PA. German, English, and Irish on my dad's side, Polish and Czech on my mom's side. While my dad's side was always more of a mixed bag because of being a disastrous family, my mom's side was super easy; my grandfather's parents immigrated from Poland, my grandmother's parents were "Czech". Easy peasy. No one in the family had second thoughts about how broad this term actually was.

Being a little kid and wanting to feel special, I really keyed on this "Czech" ancestry that everyone in the family automatically associated with Czech Republic after the dissolution of Czechoslovakia. In a sea of Polish, Italian, Irish, English, and German flags, artifacts, and dishes there I was as the solo representative of the Czech Republic (my cousin of the same age and school district would always do Poland). To make it even better, being Czech was awesome. The Penguins had a ton of Czech players. Czech Republic was my go-to second rooting interest for international events. Jagr was the GOAT. Gold medal in the 98 Olympics, suck it Slovakia. My grandmother's potato dumpling haluski kicked the ass of all the noodle haluski eating Polacks and Prague was the coolest European city. I had reports to prove it.

Fast forward to late last year when my wife and I decided to do 23andMe ancestry reports. Her interest was of genuine curiosity as Mexico does not have the ancestral obsession of the United States, whereas I already knew who I was thanks to years of grade school projects but gave it a go to see if anything cool came from it. Her report came back with awesome results. 50% Spain, 33% Native American, 5% Sub-Saharan Africa, 3% West Asian and North African, and some other randoms mixed in. Pretty cool stuff.

Mine went pretty much as predicted. 99.9% WHITE AS ****. All Cradle of Life ancestry bred out of me over the years and confirmation that my great grandmother with the Cherokee blood was as full of **** about that as she was about being related to Frank Gorshin AND Don Knotts. 28% British and Irish, 13% German, and 47% Eastern European with half being from the Lesser Poland Voivodeship and the other half being from... not Czech Republic? Probably Hungary, maybe Slovakia, possibly Ukraine, but 100% absolutely no ancestors from what is now the Czech Republic. All those reports, projects, self-identity, and rooting interests tied to a place I had no actual connection to. What a waste.

As an adult, it makes sense. My grandfather's parents immigrated to the US when that part of the world was all Austro-Hungarian Monarchy, Kingdom of Bohemia, Kingdom of Hungary, etc. nonsense. Wherever they originally hailed from was an area that became part of Czechoslovakia and I guess when asked what they were they said “Czech” because that’s what it had become. It's kind of a weird feeling to have spent so much time focusing on this place that I have no actual connection to, while comparatively knowing jack **** about Slovakia, Hungary, or Ukraine. This has certainly piqued my interest and given me a catalyst to dig more into my ancestry.
Top

I love this stuff. That is wild.
Top

I'm strangely excited to visit a new hampshire cemetery this summer that has my 5 and 6x great grandpas (amongst others) who fought in the revolutionary war. Recently found the family cemetery is still in tact with graves of 6 ancestors from that time period.
Top

Man, that's wild. I made the same discovery in the early 2010s. Traced my ancestry back to a specific village in Europe that was decidedly not-Czech. Turned out to be Tarnawa, Poland. I still self-identify as Slovak, though. I made the transition from Czech to Slovak at some point during my early research and just never embraced the Polish nationality once I actually nailed it down.
Top

We'll see where this leads, but I can see embracing something other than Czech being difficult. When I was in the Navy my buddy and I used to play Czech vs. Slovakia in NHL and FIFA. Turns out I'm a traitor and he's not even Slovakian. While similarly related to the expanse of European empires, his ancestral issue ultimately boiled down to his grandmother mixing up Slovakia and Slovenia.
Top

I didn’t have fore fathers. I only had one father and I didn’t know him that well
Top

My mom had a similar experience. Her grandparents came from Italy, she's 50% Italian at least.. came back like 60% Balkan. Apparently they settled in the region of Italy her family is from.
Top

The only real surprise in my ancestry was how dominated it was by the British Isles. My last name is Shaffer, so I really thought I would have more German ancestry.

I think I have mentioned this before, but for those interested in ancestry, I strongly recommend visiting a Mormon library location. We went to the main one in SLC, but they have satellite locations around the country. In addition to finding my great-grandfather's WW1 draft card, I was able to trace my maternal lineage back to the ruling clans/kings of Dark Ages Wales.

I also discovered an ancestor (name escapes me) that fought at the Battle of Agincourt and helped save Henry V. All kinds of cool stuff in there.

This was my result: 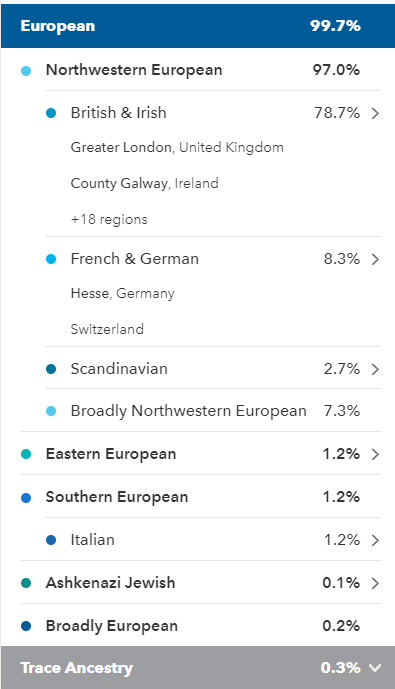 The only real surprise in my ancestry was how dominated it was by the British Isles. My last name is Shaffer, so I really thought I would have more German ancestry.

I think I have mentioned this before, but for those interested in ancestry, I strongly recommend visiting a Mormon library location. We went to the main one in SLC, but they have satellite locations around the country. In addition to finding my great-grandfather's WW1 draft card, I was able to trace my maternal lineage back to the ruling clans/kings of Dark Ages Wales.

I also discovered an ancestor (name escapes me) that fought at the Battle of Agincourt and helped save Henry V. All kinds of cool stuff in there.

This was my result:

I just went to the family search which is a LDS website, signed up for a free account and they have a lot of what I dug up already listed and more, thanks! This is coot
Top
Post Reply
84 posts