This is remarkably boring.
Top

Havertz to Chelsea. Why Chelsea?
Top

Messi stays at Barca for at least one more season.
Top

Does this mean he’s gonna quit whining like a little dodint?
Top

Sports in the age of COVID:

Czech Republic beat Slovakia 3:1 in Bratislava on Friday as a part of the "League of Nations" tournament, but because 2 trainers tested positive for COVID, the Chief "COVID doctor" of the Czech Republic ordered the team to be dismantled - right before the Czechs are supposed to play Scotland on Monday.

NONE of the team members - players (including substitutes), coaches, staff - are allowed to participate. So, in the spirit of "The Replacements" the Soccer Federation was calling on pretty much anybody who can play - and can make it for the mandatory pre-game COVID testing. As a result, the core of the team will be players from the 3 teams (not very successfull teams) that are closest to the stadium where the Scotland game is to be played on Monday...

I get PSG, but why exactly do Germans hate RB Leipzig? (Unless it's West looking down on East thing.)

I understand, they bought the license. But ever since then, they grow primarily through internal development, they have awesome academies in both Germany and Austria, they support young innovative coaches, make money by selling expensive players and don't make stupid expensive purchases (there is no freakin' way Schick is worth EUR 26.5M that Leverkusen just paid to Roma). And yet they kick butts of all western teams not named Bayern...

What's hate-worthy in all this??
Top

I get PSG, but why exactly do Germans hate RB Leipzig? (Unless it's West looking down on East thing.)

I understand, they bought the license. But ever since then, they grow primarily through internal development, they have awesome academies in both Germany and Austria, they support young innovative coaches, make money by selling expensive players and don't make stupid expensive purchases (there is no freakin' way Schick is worth EUR 26.5M that Leverkusen just paid to Roma). And yet they kick butts of all western teams not named Bayern...

What's hate-worthy in all this??

It's not an East/West thing. It's also not true that all Germans hate RB. Very few people actually do. It's mostly the hardcore fans that do. To quote: "They are reviled for being the most Premier League-like club in Germany." Their pretty "we don't spend a lot of money" narrative is, of course, bullcrap. I'm too disillusioned to hate a football club for their business practises, though. I know I should, though, as RB is purely a marketing vehicle.

count2infinity
Posts: 24526
Joined: Tue Mar 24, 2015 2:06 pm
Location: All things must pass. With six you get eggroll. No matter how thin you slice it, it's still baloney.
Contact:
Contact count2infinity
Website

Premier league is right around the corner! Get your Predictions in while you can!!!

Here was my prediction for last season ^

Top 3... to be fair, there was a big gap between City and Arsenal.

But pretty spot on there.
Relegation: A big 0-fer. Sheffield being the big surprise there! Close on Villa, but not close enough.

Biggest rise: Southampton up 5 places, so tif's hat is safe. Burnley with a 5 spot as well. I guess technically speaking these were the biggest rises, but Sheffield United is certainly the clear winner here.

Biggest Fall: Newcastle stayed spot on where they were. Watford with an 8 place drop wins... West Ham wasn't far behind with 6 spots.

So for this season:

Top 3: Seems like it's a 4 way race between City, Liverpool, Chelsea, and United. Really any mix of those 4 at the top wouldn't surprise me one bit. I'll go Chelsea, City, Liverpool to pull for the American superstar, and F*ck united.

Relegation: Villa, West Brom, and Brighton... I hope Leeds stays around for a while, and Fullham has always been an American favorite, so come on lads... stay up.

Biggest rise: West Ham? Almost has to be... maybe Everton will get things sorted out, but you'd have to guess the Irons here.
Biggest fall: Torn between Burnley and Sheffield United... SU is one place higher so I'll go with them. They both got off to a good start last season and then coasted a bit into the end.
Top

- Danny Rose is a massive pain in the ass.

- My predictions from last season:


The Top 3 is dependent on if the Spurs decide to continue spending money, which they don't seem inclined to do at this point. dadholes toying with my emotions.

Top 3: Liverpool, City, Spurs
Everton Trophy: Everton
Relegation: Brighton, Burnley, Sheffield United
Rise: I could see it being Southampton but for the sake of differentiation I'm going to say Palace unless they sell Zaha.
Fall: Chelsea

20-21 Predictions:
Top 4: Liverpool, Chelsea, Man U, Spurs
Everton Trophy: Wolves
Rise: Kind of an unfair rise choice since they were in a lower league, but I think Leeds with be this year's Sheffield
Fall: Sheffield United. They'll stay up but won't replicate last season.
Relegation: Villa, Fulham, West Brom 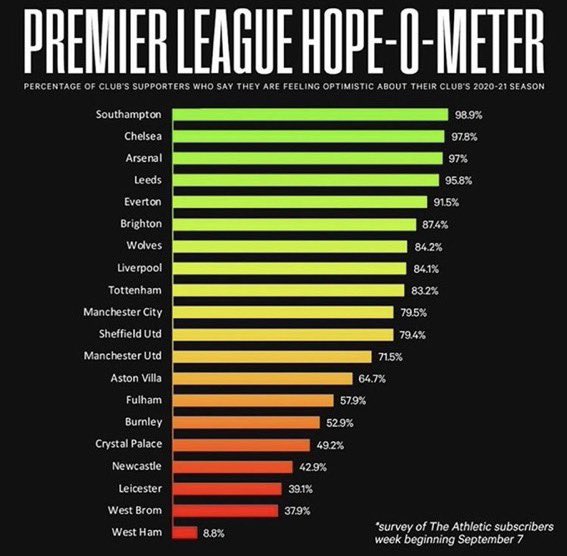 Woof. Might as well send Fulham back to the Championship today.
Top