Arminia Bielefeld sits atop the 2nd Bundesliga so cancelling the season IS NOT AN OPTION.
Top

That's an interesting point... if the season gets canceled, what happens? Promote/relegate based on where we're at right now? Take a one year pause and just start over? Liverpool are clearly champions... give them the trophy?

WHU’s owner wants to act like the season never happened and reset everything to the end of the 18-19 campaign.
Top

I'm ok with giving Liverpool the trophy but IMO with 5 teams within 4 points for the last 2 relegation positions I'd leave the league makeups as is.
Top

Feel like you'd have to do something. Would suck for the championship teams that are about to be promoted
Top

Maybe have a quick home/away tourney with the bottom three and top three in each division?

I don't know of a fair way to do it.
Top

Good thread on the challenges to European football.

I think the fairest thing to do with this many games left is just hit the reset button and start the new season. Yeah, sucks for teams that are in promotion positions, but I just don't see a more fair way to handle it.
Top

Increasing the number of teams for one season seems like a fairer option (I may be biased...). No relegation just promotion.
Top

Increasing the number of teams for one season seems like a fairer option (I may be biased...). No relegation just promotion.

The would involve more games though... not that I'm against that, just something to consider.
Top

Sure, it would be a tight schedule. In Germany, for example, you could scrap the winter break, include more mid-week gamedays. Of course, the Bundesliga would go from 18 teams to 22, that's doable. Other leagues, that already have 22 or 24 teams, maybe not so much.
Top

Yeah, there is already a huge problem with fixture clutter as it is.
Top 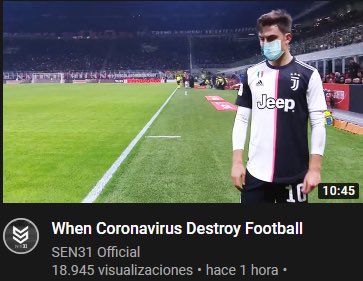 The German Bundesliga is fighting for its survival amid doubts over the return of domestic football until the summer due to the growing coronavirus outbreak, the league's chief executive Christian Seifert has said.

The top two divisions in Germany have been suspended until April 2 due to the global pandemic and could be subject to further cancellations, Seifert, who heads the German football league (DFL), announced on Monday.

Good luck with that you unspeakable sacks of sh*t.
Top

Euros postponed to next summer. Also,


PL Clubs should be told today that UEFA wants the european domestic seasons finished by the end of June.

UEFA also want CL/EL to be completed, and believes all leagues across Europe should restart at the same time.

This may spark fears that the season could be declared void if the coronavirus makes it impossible for clubs to complete their fixture list by June 30.

Gov't projections have the coronavirus peaking in England in 10-14 weeks (in June).

PL has a conference call set for Thursday to discuss.

League will likely need more than a month to play the 9-10 remaining games, which means it would need to restart prior to the end of May to finish by June 30.

There is currently no prospect of the PL restarting by April 4.

One proposal on the table is to truncate the CL with both semis and the final played over a 4-day period in Istanbal. If agreed, the same would apply to the EL, where the final is set to be held in Gdansk.

Good luck with all of that. The idea for completing the Champions and Europa Leagues is decent and something I could see carryover as a means of finishing out the individual leagues. For example, this is how I would deal with the Premier League.

**** mathematical probabilities, Liverpool wins the Premier League and gets the first spot for European qualification. Man City and their ban can **** off out of European consideration. Current spots of 3 thru 10 (Leicester, Chelsea, Man U, Wolves, Sheffield, Spurs, Arsenal, and Burnley) compete in an 8 team tournament to determine Europe qualifications. Two finalists get spots in the CL, third place game winner gets in the CL, third place game loser goes to EL, best placement of the first round losers play to determine who gets in the EL group stage and who goes to qualifying.

Could do something similar with the bottom of the table and the top of the Championship table to determine promotion and relegation, but that's murkier for sure.

Other than that, I don't see how they just don't pretend like this season never happened. Hard to promote, relegate, and assign Europe spots with 9 games left.
Top

The longer this goes on, the more I'm thinking just cancel everything and hit reset in August. I know it sucks, but it is what it is.
Top

England's football authorities will delay the start of the 2020-21 season until the last ball has been kicked in the 2019-20 campaign, with sources telling ESPN that this year's Premier League and EFL seasons will "absolutely finish before the next one begins."

The decision, announced following a video conference involving all 20 Premier League clubs on Thursday in which it was agreed to extend the football shutdown until April 30 at the earliest, has raised the prospect of Liverpool having to wait until the autumn, or even later, to secure their first league title in 30 years.

Interesting and potentially disastrous approach. Need everyone in Europe on board or else the summer transfer window is going to be a diaster.
Top

That is terrible.
Top

They will test this out in non-league to gauge the reaction.

I still think they end this year outright, crown champions, cancel pro/reg, and replay next year with the same teams in the same divisions.

English non-league football season - anything below the National League - declared null and void.

The Bundesliga aims to resume play at the first weekend in May.
Top
Post Reply
6580 posts