Not Brysons fault he couldn't hit a fairway. A lot of unforseen things happened to him that caused it. Just ask him.
Top

Really happy for him

Really happy for him

Same. What a feeling that must be.
Top

Didn't get a chance to sit in on this winner interview as I thought I might try to make the drive home but ultimately decided against that. So I didn't get to hear what DJ had to say about his win. The tears he shed on the putting green in the CBS interview show just how much this one means to him. All of those nightmares from majors past (Whistling Straits, the Pebble Beach meltdown, OB at Royal St. George's, etc) are out the door now. If winning the US Open just got the major monkey off his back, this Masters victory cements his HOF resume. He might just be hitting his peak now. He is playing Mayakoba in a couple of weeks so it'll be interesting to see if he keeps the run going that he's been on since the 80-80 at Memorial and the WD at 3M.

Some other fun and interesting factoids mined over the last few hours:

It was pretty damn surreal watching this Masters without fans. But it gave me the unique opportunity of walking the back 9 with the featured groups on Thursday and being about 15 yards from the 12th tee as Tiger was hitting. Last year, I got to see Augusta National around sunset with nobody around and it was truly a time of reflection of all the history that has taken place on those grounds. Today, there were maybe 400 people around the 18th green as DJ finished up and as they left and we were milling around to see if we were going to interview DJ's caddy/brother, it again was time for that reflection. It's certainly a place like no other out there.
Top

I know scoring conditions were good, but do you think the lack of fans is a big reason for the lower scores? I feel like playing the game with thousands of patrons on the course and surrounding the fairway has to play on nerves quite a bit. Could just be a coincidence though.

Take a look at the 2015 leaderboard. Spieth won at -18, two runner-ups finished at -14, nine total players were -9 or better. This year, DJ wins at -20, two runner-ups finished at -15, twelve total players were -9 or better. I don’t think a lack of crowd had much to do with it. The weather this year was more than ideal for scoring. What’s interesting is that the wind really kicked up at the end of the day and had it not been for football and this was a 5:00 finish, that back 9 could have been a real roller coaster.
Top

Bring back the persimmon drivers.
Top

I blame the weather for the low scoring more than anything else. I'd like to see a tournament ball for the tour
Top

I had no idea DJ's future wife is Wayne Gretzky's daughter.
Top

For that matter, I had no idea Wayne had a daughter. Why would I care.
Top

Oh gaucho. You may care if you followed her instagram
Top

Well, I did a quick Google image search and found myself caring.
Top

Also, as much attention as Tiger's misadventures on 12 got, this is damned impressive. Talk about putting a hole behind you. 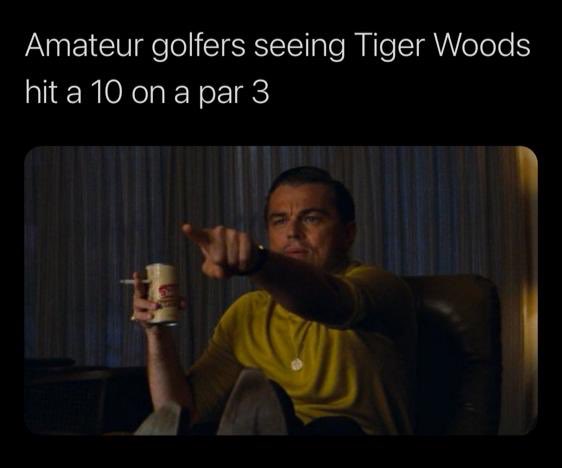 Hes trying to slide into the DMs. And really can you blame him?
Top

He is. He's very quiet and just goes about his business. I think he learned some hard lessons from the suspension he got a couple of years ago and he's just let the golf game do the talking. Rory said that he made sure to play his practice rounds with DJ hoping that the easygoing demeanor would rub off on him. Rory was quoted as saying that DJ's attitude on the course might be the best anyone all-time has had. He truly doesn't let anything bother him. He gets dinged on a rules violation at Whistling Straits -- he takes the lump and moves on. He 3-putts to lose at Chambers Bay -- it rolls off his back and he's ready to go 'take care' of Paulina. I think the emotion we saw out of DJ in the Balionis interview will endear him a lot more to players and fans.

BTW, on that Tiger 10 -- I heard this morning that there were a couple of betting sites that had 150-1 and 200-1 odds on Tiger making a 10 at the Masters. Considering that he had never made a 10 anywhere in his professional career, that's an impressive hit.
Top
Post Reply
4619 posts