I flew into AZ at 8am. Bought a car by 10am. Drove through some really fantastic mountains. Had lunch. Drove to Amarillo. I certainly count that as having been to Arizona.
Top

ok, so I had a 8 hour layover in Dallas last year. I went out of the airport, went to Pecan Lodge to get some bbq and then visited the JFK assassination site. Is that considered visiting the state of Texas?
Top

Yes. Why wouldn't it be?
Top

I don't know apparently there are some very strict rules as to what constitutes "visiting a state."
Top

No sleep no count.
Top

I don't know, Freddy has an expectedly bad take
Top

In my list I only count states I've spent the night in.
Top

That's such a bad take that it's not even worth the effort of arguing against it.
Top

By the way, and I know this isn't what you're saying, but the Southwest Chief offers a far more enjoyable and scenic route through Arizona/New Mexico than I-40.

Y'all are free to count whatever states you want, I was just stating the rationale for my list.
Top

I fell asleep on my flight to Arizona. Therefore, I visited New Mexico
Top

it was cool to drive on I-40 in AZ in December as the westward starting point of I-40 is in Wilmington NC. Long-ass road

By this loopy I've-driven-along-a-roadway-in-a-state metric, my total goes up to 27, and may go up to 29 if I'm misremembering the road route I took to get from Altoona to Boston.
Top


ME is the only other state.


ME is the only other state.

I was in the Marines with a guy from Maine and we got along real well.

If I hadn't been sent to Japan I was going to go to U of Maine.
Top

I was in the Marines with a guy from Maine and we got along real well.

If I hadn't been sent to Japan I was going to go to U of Maine.

It's my favorite place in the world. As I've mentioned repeatedly, I'd move there in a heartbeat.
Top

I hear horror novelists do well up there.

I've been to his house. Or, the fence in front of his house, to be more precise.

That's not creepy at all. It's not like you monitor his house on Redfin to see if he ever puts it up for sale because that might be a bellwether for whether or not he's disbanding the Foo Fighters.
Top

Two of the states that I took care of, I did very minimal things in them. I only checked off Idaho because I stopped for lunch on a drive from Salt Lake City to Butte. And I've got Mississippi because two of the times I've worked the Memphis tournament, I've driven to Tunica to gamble (one win, one loss).
Top

Not sure if it's ever been discussed on this thread but has anyone been to all 50 states? If not, who's the closest to 50? I've got 44 and the ones I still need to check off are Vermont, Maine, New Hampshire (which is surprising since I lived in CT for 5 years), North Dakota, New Mexico, and Alaska.

Welp, scratch New Mexico from the list. And it wasn't in the way that I wanted to get it. I was at the Phoenix Open but one of my cameramen came down with Covid symptoms Thursday night. Due to contact tracing, I was sent home. They gave me a choice of staying in my hotel for 10 days and then flying home or driving it. I write this post from El Paso. At least I didn't see a cloud for 500 miles and the views in New Mexico are really damn good. Next up, a drive through all of Texas that may take just about my entire day on Saturday. The goal is to be home by kickoff of the Owl on Sunday night.

Spent a couple hours in NM, exploring the lovely (not really) city of Hobbs. I was in the area at one of our plants in Denver City, TX, 1/2 hour away. Not a garden spot but I would love to go back and see some of the more scenic parts of the state.

Denver City is about a 1:15 drive from Lubbock. I was there a couple times with one of my employees. Before I had ever been there I said "Two and a half hours driving every day seems like a lot on top of 8-10 hours at the plant, and there's a Best Western, which I don't prefer but it's probably not bad, why don't we just stay in Denver City?" His response was "Ronnie I know you're the boss, but..... no."

He was right. After a year basically spent working in my kitchen though, I'd take a week in Denver City right now.

Oh, also, as far as IPAs go you could do a lot worse than a Happy Camper 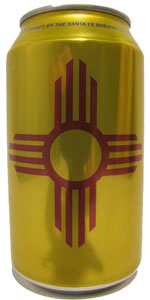