No wonder the empire lost
Top


After nearly twenty years, the U.S. Air Force is buying brand new Eagles to fly alongside the F-22 and F-35 fighters stealth fighters. Despite a lack of stealth there’s one thing the F-15 can do that the new fighters can’t: carry lots and lots of missiles. The new F-15EX will likely serve as a flying magazine for stealthy fighters, teaming up against adversaries to shoot them down in large numbers.

Stealth is a design philosophy that's too easily defeatable - The Yugoslavs figured out how to knock stealth jets out of the sky using goddamn cell towers over twenty years ago - to justify all the design compromises required to really execute. For example, the F-35 has almost no rear quarter visibility, and in order to carry a meaningful weapons loadout it must carry stores externally, which completely negates its stealth profile. The F-22 overcomes some of those limitations simply by dint of being so utterly massive (it's hard to get across how big the aircraft is until you see one in person) that it can sport movable control surfaces that have the same surface area as the actual wings on an F-16. Never mind the complexity in construction that leads to abhorrent and even prohibitive costs.

I really really wish the US would look towards a Gen 4.5 solution, like the Eurofighter Typhoon; conventional aero platform with super-maneuverability capability, but with 21st century sensors and cockpit displays. (I don't necessarily favor a delta configuration like the Eurofighter, but I'm talking more in concept than in particulars.) As is, the F-15 is capable of performance metrics that hit the point of human endurance, so the pilot is the limiting factor. That's been true of almost all modern aircraft introduced since the 1970s. There's no real need to overthink things by making sure all the lines are parallel or that panel joins are zigzag to they scatter radar energy. 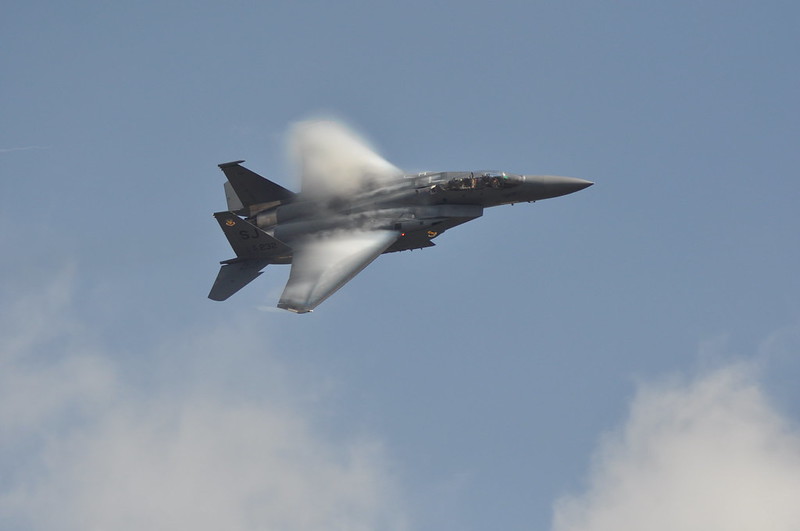 Wait til you see the UCAV system they're starting to build.

Some black SUV people showed up at our squadron one day with a couple nerds in tow, in 05 or 06. At the time we were flying the RQ-2, pretty much the WW2 Biplane of drones. They spilled a few beans about the SWARM, planned to be operational in 20-30 years. Dozens of indefinite-TOS small UCAV air-to-air fighters that act as a unit, and are plucked from the swarm to deal with enemies.

They asked mundane stuff about signal strength, and camera quality, but they mostly wanted to know about our telemetry losses during recovery maneuvers in some kind of spin or stall. They weren't pleased with our procedures. Their plan was to use the airfoil as a vectoring system for hypermaneuverability. I don't know what weapons it would have but that's some scary ****.

One of the nerds and I got snippy early on, before I realized he was just there for answers and thought zero of my opinions.
Top

Having a Lance Corporal insignia on his truck means he’s a Canaan.
Top

Canaan is perhaps too gentle a word.

That's what I thought.
Top

Nail, meet head. There is a direct correlation between how much someone advertises themselves as a "veteran" and how likely they are to have been involuntarily discharged from the service. Also a correlation between that and the likelihood they've never been within 1,000 miles of combat.
Top

Could also be a medical separation.

Either way, if that was his highest rank he was only in for like 2 years.
Top

It's funny. The extent of my rah, rah stuff is one of those small circle USMC stickers on the back of my vehicle and a thing my wife made me at a paint party that hangs in my Study.

I think the same thing when I see the entire back window of a truck covered in stuff.
Top

I think it depends on the individual. My father-in-law has pretty flashy service résumé, that includes combat deployments, and more than a fair share of medals/awards. He is super oorah.... like, within 2 minutes of meeting him, you'll know he was a Marine.
Top

I believe you'd get your ass kicked for puttin something like that on your car, man. There are things you can get, like Freddy's sticker, that aren't obnoxious about it.

I just can't imagine me putting a big corporal sticker on the back of my Kia Sportage.

This is a great read on the 1913 Gettysburg reunion. That has always fascinated me, might get the book that is linked there at some point.


All of my USMC stuff is in one corner of study.
Top

I have a beard Greg, can you milk me?
Top

Last Battle of Britain pilot ace passed away today at 101.

So there were two US soldiers that were killed on base in Afghanistan earlier this week. I believe it was an attack by an Afghani soldier "ally." Would the two soldiers be eligible for a Purple Heart?
Top

The commandant has banned Confederate symbols from USMC bases.
Top

So there were two US soldiers that were killed on base in Afghanistan earlier this week. I believe it was an attack by an Afghani soldier "ally." Would the two soldiers be eligible for a Purple Heart?