"What's the nature of the trouble?"

The aircraft in question appears to be N772UA, which is a 777-200 (non ER or LR) and was the fifth Boeing 777 off the production line. It's 26 years old and has two P&W PW4000 engines, one of which obviously went through a major malfunction, although from the video above it seems that the main fan is intact. The housing has been blown off and there's fire on the outside. I wonder if there was a fuel leak that caused an explosion that blew off the fairings around the engine.
Top

It's 26 years old and has had two P&W PW4000 engines, one of which obviously went through a major malfunction, although from the video above it seems that the main fan is intact. The housing has been blown off and there's fire on the outside. I wonder if there was a fuel leak that caused an explosion that blew off the fairings around the engine.

Got you, fam.
Top

Geez.... That fell right on the front sidewalk too.
Top 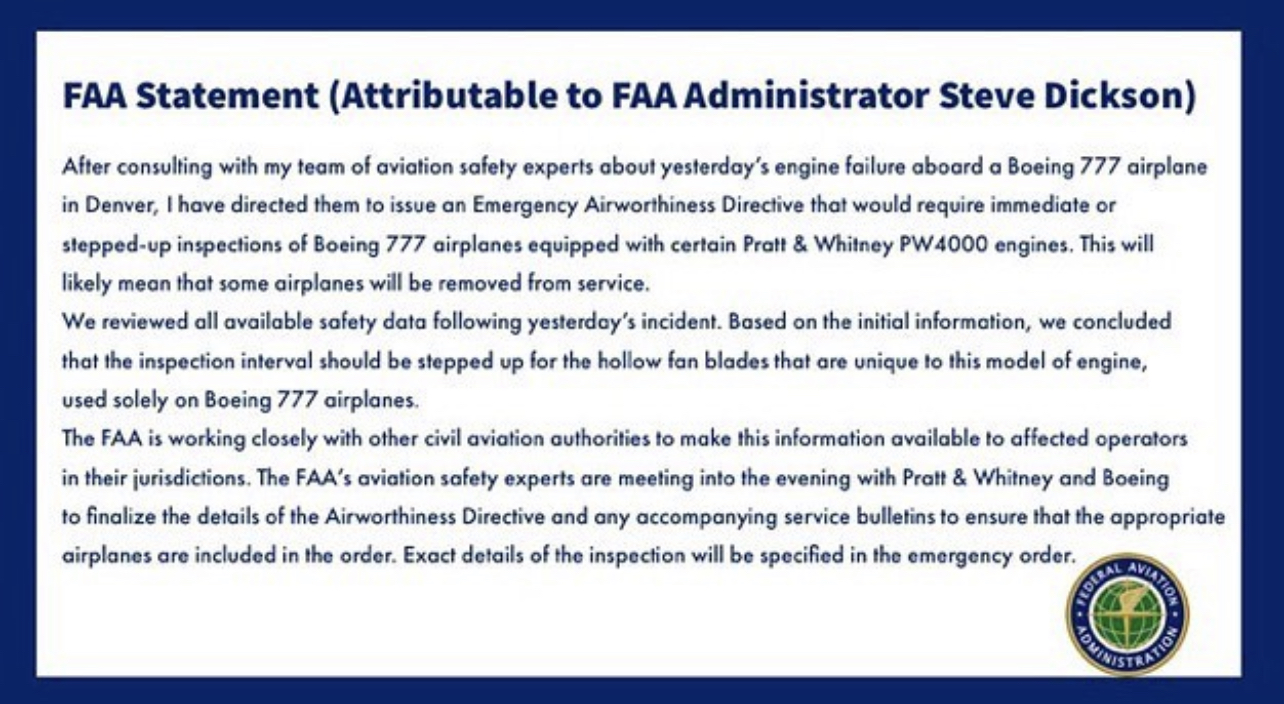 
American Airlines Flight 2292, an Airbus A320 flying between Cincinnati and Phoenix on February 21st, 2021, had a bizarre close encounter with what its crew described as a "long cylindrical object that almost looked like a cruise missile" moving extremely fast over the top of their aircraft as it cruised along at 36,000 feet and 400 knots. The incident occurred over the remote northwest corner of New Mexico, to the west of the tiny town of Des Moines.

Steve Douglass, an experienced radio interceptor and the proprietor of Deep Black Horizon, told The War Zone that he was recording from his arsenal of scanners when he heard the strange transmission. The War Zone has reviewed over an hour of audio that Douglass has provided to us from before and after the strange radio call. We are working to authenticate it from the FAA and get further information and comment from the agency on the event. We have also reached out to American Airlines for any additional details they can provide.

Of course, VAS Aviation YT has the ATC comms and ADS-B track for the U328 mishap.

It never ceases to amaze me how calm pilots are, especially in these situations.
Top

Yeah, this was the first CVR audio I've heard in a while where the pilot sounds the slightest bit flustered at first (stammering, using the wrong callsign, etc), and it's still not even really a little bit panicky. But ATC is rock solid as always, and - per Captain Joe's breakdown - you can almost hear in the pilot's voice the moment they complete all the mishap checklists and realize the aircraft is not in mortal danger and that they should be able to reach the runway safely.
Top

Commercial pilots get a lot of simulator training in order to prepare them for emergencies exactly like this one. Engine failures on landing, engine failures right after V1 on takeoff, etc. The idea is to train them to the point where it becomes second nature.

Simulations are one thing, but real life is another, IMO.
Top

Think to the accident investigation scenes from Sully. How they try to grill Sullenberger over his decision to ditch in the river, when their sim pilot was able to make it back to the airport....................... on their 17th attempt. lol

But that is the point of simulator training. Military programs like TOPGUN and Red Flag exist for the same reason - the idea is to expose crews to high-pressure decision making and mission execution when live ammo isn't being chucked at them so that when it is they can approach it with a been-there-done-that level of experience. The Air Force found that something north of 90% of pilots that were shot down (either by air-air or ground-air fire) were lost before their 10th combat mission... Red Flag is meant to give them those 10 missions of force-on-force experience.

Nothing can replace real world experience, you're right. But sim experience can reduce the stress level when encountering a crisis for real.
Top

To be clear, I'm not saying either of you are wrong...
Top

I also find it interesting that the media coverage of this appears (to me) to be focusing heavily on the Boeing angle. That's certainly understanding, given the MAX crashes and the associated heavy scrutiny. For example, Forbes has an article (https://www.forbes.com/sites/edwardsega ... 55a49f62ec) with the headline "777’s Engine Explosion Puts Boeing’s Reputation On The Line — Again."

But people with knowledge of how the industry works know that this engine failure is really Pratt & Whitney's problem, not Boeing's. Boeing builds the aircraft, but engines are covered by a separate contract with the engine supplier, and for that version of the 777 the buyer actually had three engine choices: General Electric GE90, Pratt & Whitney PW4000, and Rolls Royce Trent 800. Boeing doesn't deal with engine maintenance—that's in the contract with the supplier—and neither does Boeing design the engines.

Here's a close up of the broken fan blade: 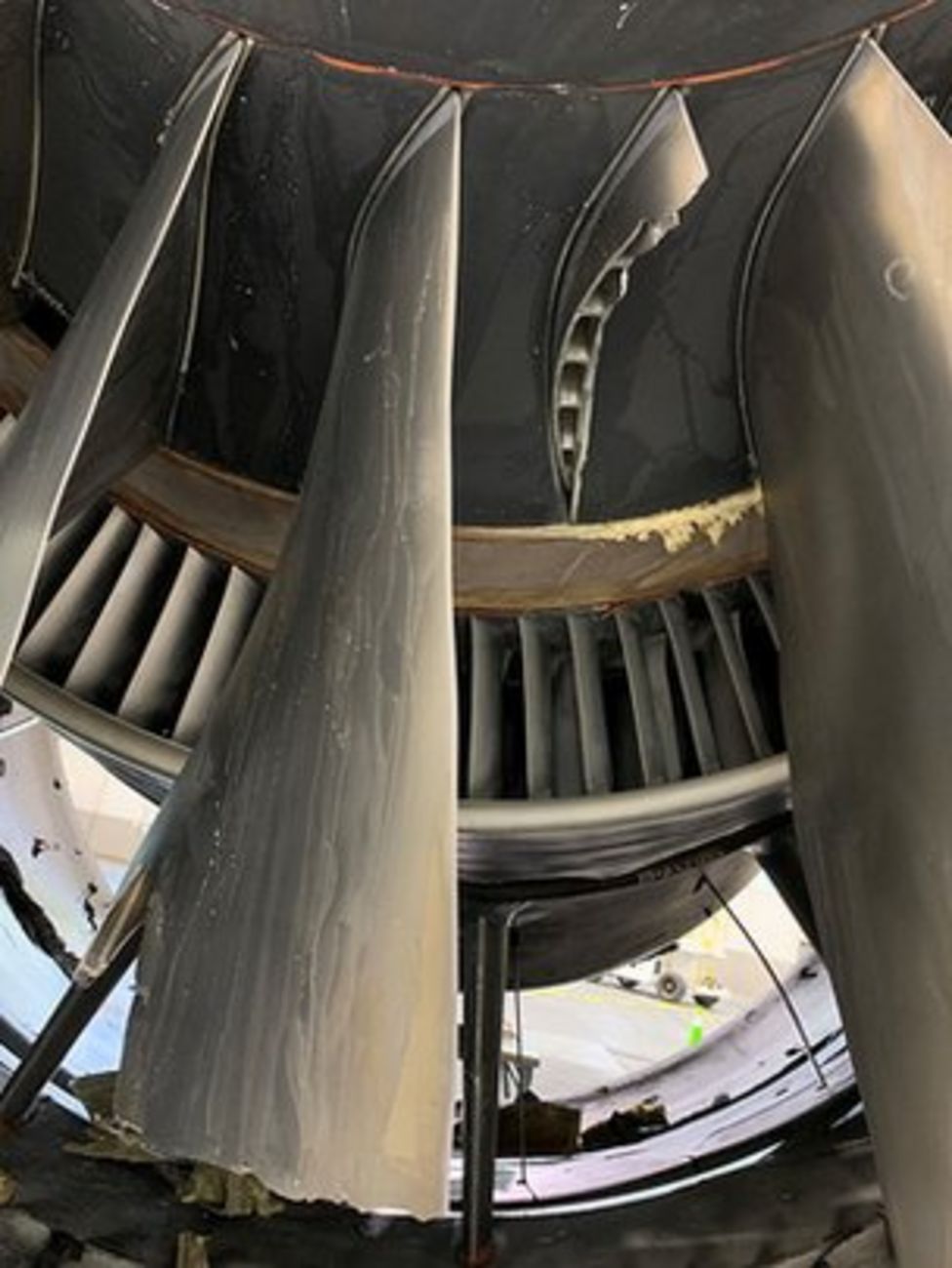 So 35 years ago yesterday, this happened....

I knew ERI had mainline service but no clue that there was direct service from YYZ, even as an intermediate stop en route to PIT. Pre COVID ERI was down to a couple regional jets a day to PHL, ORD and DTW.

Asbury Rd is still there and open on the end of RWY 24, which it's my understanding has been lengthened since then.
Top
Post Reply
1471 posts