This is how you know things are bad:

Unlike United, which limited their change fees to domestic travel, American will allow flyers to change flights without any fees to a number of North American destinations. The new policy is effective immediately and will extend to main cabin, premium economy and premium flyers traveling across the United States, Canada and Mexico.

American is taking their policy a step further by allowing flyers to keep the value of their ticket if they book a lower-priced fare. For example: If a flyer originally books a $500 flight, and then decides to change to a $300 flight, they will be left with a $200 voucher valid towards a future flight. The elimination of change fees will also apply to award travel booked with AAdvantage miles.

The carrier will also allowing flyers to go standby on a different flight to their final destination on the same day for free. The new policy starts on Oct. 1, 2020, and applies to domestic and international travel, including Basic Economy fares.

Boeing may be in the process of subtly rebranding the 737 MAX. In recent weeks in some press releases, Boeing has been dropping that name and just calling the four models the 737-7, -8, -9, and -10.
Top

I assumed that was going to happen eventually.
Top

I missed this from last week. A Ukrainian woman who had flown back to Kiev following a beach holiday in Turkey on Ukrainian International Airlines flight PS-6212 was "feeling hot" during the offloading process and couldn't wait to cool off, so she opened an over-wing emergency exit and went for a stroll on the 737-800's wing.

Well at least the plane was grounded...?
Top

I saw that online and thought it was the Onion.

As Boeing struggles to regain altitude after its high profile difficulties with the grounding of its 737 Max and the coronavirus pandemic, new documents obtained exclusively by KOMO News Radio show the company could be be facing new questions about the structural integrity of its Boeing 787 Dreamliner, this time involving the vertical tail fin on that aircraft.

A review of the records show that engineers raised concerns about the vertical tail fin on the jetliner, concerns that were first voiced six months ago.

The questions could prompt new uncertainty about Boeing's Dreamliner, which the company desperately needs to be successful.

It started with a mechanic.

It's not clear what airline the the mechanic worked for, but the technician noticed something wrong on a Boeing 787 Dreamliner while working on the tail of the aircraft. The mechanic noticed a slight dimple, also known as a depression, on the vertical fin, near the spot where it joins with the aircraft's fuselage. 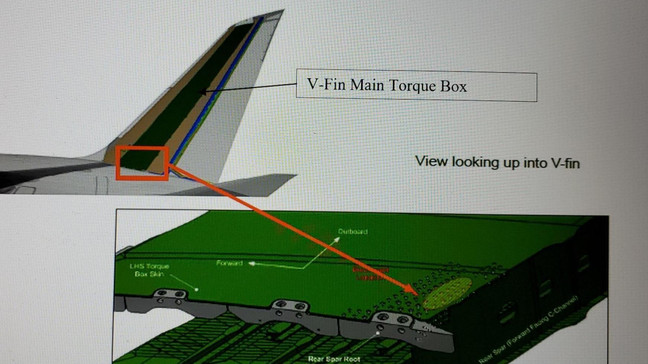 As mentioned in the article, Boeing has also identified manufacturing defects in a handful of 787 rear bulkheads and additional manufacturing defects with a number of horizontal-stabilizer parts, which might cause them to have shortened lives. The new problem described here sounds like it might be far more widespread than those other defects, which reportedly affect only a small number of 787s in service.

Boeing just keeps shooting itself in the foot with defects. The positive side, I suppose, for these 787 problems is that they are all manufacturing defects and not defects with the 787's design itself. As such, they should all be fixable, albeit at significant cost.
Top

The European Union Aviation Safety Agency (EASA) has completed its test flights of the Boeing 737 Max aircraft ahead of its possible recertification and return to service later this year. The flights took place in Canada. The FAA and the Transportation Safety Board of Canada have already completed their test flights. The 737 MAX is slowly progressing toward recertification, although it will probably be close to or into 2022 before Boeing can finish upgrades on all of the 450-odd aircraft already produced, let alone deliver newly built models.

The timing here for Boeing hasn't worked out too bad. Boeing lost billions of dollars and hundreds of orders, but with the pandemic the demand for aircraft is way, way down, so the pressure to get the MAX back into service has been much lower, and a lot of airlines with MAX orders probably aren't too worried about the delayed timing because they couldn't fill the aircraft even if they had them. But for the pandemic downturn, I bet a lot more airlines would and tried to jump ship to the Airbus A320 family.
Top

Hong Kong-based Cathay Pacific has launched a twice-weekly cargo flight to Pittsburgh. Cathay Pacific’s vice president of cargo said they picked Pittsburgh because, "It’s easy to get in and out of the airport. Other airports are congested; it could take a whole day for a trucking company to pick up freight. In Pittsburgh, everything can be done within three hours. It’s a matter of time and ease.”

That PIT is a ghost town is not exactly a good thing, although it did land this cargo flight. The flights are being operated using regular passenger 777-300ERs and not freighters. During the pandemic, a lot of airlines are removing the seats from their passenger aircraft and hand-loading boxed cargo in the main cabin.

It looks like the 737 MAX is getting close to recertification. From what I've read, the hardware and software changes are pretty well set, and the only stuff remaining is the training processes and procedures for pilots.

The MCAS system in the MAX will be substantially revised. The system will monitor both AoA sensors and will turn off with a warning if there is a disagreement. The system will only be able to activate for one cycle (rather than continually forcing the nose down), and multiple actions by the pilots will be able to shut it off, including manual use of the trim wheel or yoke trim switches. The system will be prohibited from adding trim that cannot be counteracted with yoke pressure, so it cannot add a level of trim that the pilots cannot overcome. All MAX models will receive AoA indicators on their display panels (formerly an option), and all displays will also now have multiple warnings for AoA disagreement. In addition to the MCAS changes, the MAX will also receive a number of other upgrades that were identified during the grounding, such as separators and brackets for certain wiring bundles in order to reduce the chance that wires might short through rubbing. Each MAX will get a full flight test cycle before delivery or redelivery.

In addition to the hardware and software, the flight manual has been updated to include details on the MCAS system and a more comprehensive checklist for trim issues and trim runaways. It is expected that simulator training will be mandatory for MAX pilots before they can fly. What exactly the sim training will cover is what the FAA and other similar bodies are still working on.
Top

Delta has announced that two more types will be leaving its fleet, although this time the departure is not immediate. Delta's 91 Boeing 717s and 54 Boeing 767-300ERs will be retired by 2025. My guess is that we may see an additional order for Airbus A220s to replace the 717s; the A221 is almost a seat-for-seat replacement, if Delta wants the same size. The 763s will probably be replaced in part by A321neos for less busy routes and in part by A339neos for denser routes. The proposed Boeing MOM aircraft would be a more direct replacement for the 767s, but I don't see Boeing having that aircraft ready by 2025, if indeed Boeing decides to go forward with that project. I think Boeing has plenty on its plate to deal with as it is.

On the Boeing front, I started reading though the 737 MAX report issued by the House Committee on Transportation and Infrastructure. While this was put out by Congress, I can't detect any political spin, and it's a thorough document. The report is damning, and it details repeated engineering screwups that Boeing then tried to cover up. The original version of the MCAS system wasn't supposed to be able to move the stabilizer repeatedly. But Boeing changed the system to give it more control, and even though that was a major change, they never performed a detailed failure analysis even though simulator test pilots and engineers were warning that a system failure could be "catastrophic." Boeing also failed to classify MCAS as a safety-critical system, which would have attracted greater FAA scrutiny during the certification process. Boeing failed to even mention the MCAS system in the flight manual. The report also details something that I think I've mentioned before. Boeing for decades was an engineering-first company, but following the merger with McDonnel Douglas and the move of the company's headquarters from Seattle to Chicago, the beancounters took over the company and the engineers were pushed aside in favor of a focus on profits and stock prices.

It's a long report at more than 200 pages, but the first 30 are a comprehensive executive summary.

The FAA has signed off on certification for the General Electric GE9X engine, which is the engine for the Boeing 777X. Eight test engines have logged more than 5,000 hours of operations and more than 8,000 cycles. While the engine is approved to fly, it will need additional test cycles for ETOPS approval (i.e., the approval for twin-engine jets to fly an extended distance from airports, such as over the ocean), which should be completed before 777X's introduction, which is now scheduled for early 2022.

The GE9X is a massive engine with a larger overall diameter than the fuselage of a 737. While it's actually slightly less powerful than the existing GE90 at 110,000 lbs of thrust versus 115,000 for the most-powerful GE90, it should offer close to a 10% increase in fuel efficiency.
Top

It actually topped 130,000 lb of thrust in testing. Was that just like a stress test to check max potential?
Top

I'm thinking that's probably it. That was the "give it max fuel and see what she'll do" test run. From what I've read, I think the official certified rating for the engine is 110k at maximum/takeoff thrust and 103k maximum continuous thrust.

From what I've read, running a turbofan at greater than maximum continuous thrust shortens its TBO spans and increases maintenance costs, so if you've got a lot of runway, a lot of airliners conduct "derated" takeoffs where they don't even go up to full takeoff thrust on the roll. Saves a little fuel too.
Top
Post Reply
1345 posts