In other news, January is a three paycheck month. Noice.
Top

Yeah I usually do a 7 to 3 or 730-3:30 give or take a few minutes. There is probably 2 people in the office when I get there. People are then surprised when they schedule a meeting at 4 or 4:30 and I decline. Just because you didn't roll into the office till 9 or 10 doesn't mean I'm sticking around.

The days I work from home I generally start even earlier because I'm already awake and can get things done. I also periodically check my email and will handle urgent things if they come up once I get home in the evening. So basically I more than put in my 40 hours regardless.

In general as I've said before my job and my boss especially are good about this stuff, but there are a few people that give looks when someone is leaving before 4 or 5pm like it's some sort of problem.
Top

I basically work 6-3 every day except Fridays where I cut out at 2. The first hour and a half in the office is great because it's empty.
Top

In other news, January is a three paycheck month. Noice.

In other news, January is a three paycheck month. Noice.

Source of the post Except that corporate America now compiles multiple jobs into one role and expects the highest level of production regardless. I used to stay late because there’s always something but then I thought about it and since there’s always something we’ll that something will always be there tomorrow as well. I’m salaried but typically work a couple hours less than 40 a week now while still getting needed work done because most things don’t actually need to be done right away.

Yeah, pretty much me too...it's well known and respected that I have a playoff mode...so I get away with all my cheeky shenanigans during regular time because they know if something needs to get done and get done right, it goes to me. And I will put in the time to make sure of it...but otherwise, I'm really laid back...
Top

Yeah, pretty much me too...it's well known and respected that I have a playoff mode...so I get away with all my cheeky shenanigans during regular time because they know if something needs to get done and get done right, it goes to me. And I will put in the time to make sure of it...but otherwise, I'm really laid back...

Playoff mode. I like that, that's me. I call myself Dirty Harry here - i do a bunch of the sht that no one wants to learn how to do so it buys me some leeway here and there. But if something complex needs done quickly it comes to me
Top

Same. Earns me plenty of leeway, that's for damn sure.
Top

Yeah, they actually had me hire someone to take over the day to day operations of the department I've been running for a few years now so that I can handle more project stuff and explore other lines of business for us...I like when things go wrong, because the more chaos there is, the calmer and better I am at stuff...
Top

I wish I could bring one of my dogs to work, but I feel like that pushes a company over the ledge from “progressive” to “a bunch of hipster doofuses”
Top

Our organization is undergoing some needless reorganization. I work for the enterprise but am based in Pittsburgh so I do some tasks for them about 15% of the time. I hung back after a meeting today and talked to my boss. He asked if I would be interested in switching to a full enterprise mission, or switching to a full local mission, when they break up our team.
Have almost no workload but have to drive into Pittsburgh everyday, or have a healthy workload but get 100% telework? Yeah, I'm going to go ahead and push for that full telework gig, kthx. There is a reason only 15% of our time is allotted to local work, that's all the time that is needed. The folks that opt to work locally will eventually either be reclassified down or they'll phase the positions out by attrition. In 5-8 years we'll be back to having an enterprise team that helps out locally...

I'd still rather get that promotion I mentioned earlier, should hear how that turns out in a month or so. Would render the enterprise/local issue moot.
Top

So I have not mentioned anything here because I suspect the guy is the sort to get IT to find out if we're saying anything about him on social media, but we found out on Tuesday that our boss from hell - who in 2018 had his management role expanded to include my department- is being sent back to just his old role. We're getting a new reporting structure to another established manager who I have known a bit for a couple decades and is tough but fair.

Just one example- this guy pulled everyone into a conference area one day and just announced "I want to let you know that <a manager in our department> has been put on administrative leave immediately. I think it is unlikely she will be back. <Two other managers, he hadn't spoken with previously> will be taking on her roles." No contact with HR about it, nothing. She had apparently had a couple audit items come up but of the low to medium risk sort that typically go in for remediation- not the this person is stealing, she has to go kind.

He was actually suspended a couple weeks for that one, but remained our leader. He seemed to have two silos for the managers under him: people he was abusive to, and tried to get them to quit, or people he didn't give the time of day to (I fell into the latter bucket, thank God). He had a lackey who stuck her nose into everything and being his eyes and ears, despite her also having no experience in our function or as a manager of anything. I spoke with the new manager for an hour last week, which was approximately 1/2 hour than the other guy had spent with me.

He had hired a consultant to create a reorg plan, essentially without any in depth conversations with the staff about their duties and roles. This reorg had gotten to the point where they were interviewing for a new Sr. Director to start this month before they finally pulled the carpet out from under him.

Needless to say, this has been one of the best weeks ever. Would have only been better if the guy had been totally let go.
Last edited by RonnieFranchise on Sun Jan 12, 2020 12:12 pm, edited 1 time in total.
Top

I doubt they’ll be sticking around after what happened, so you may wind up with even better news yet.
Top

I doubt they’ll be sticking around after what happened, so you may wind up with even better news yet.

God willing. As a (extremely minor) shareholder I have concerns with this guy continuing with the company. His role is a fairly sensitive one.

I guess I thought people were making up stories about people like this actually existing after 16 years of awesome bosses with this company. They're not.
Top

Baby steps, I guess. Our Sr. Director was fired last year and we practically through a party the next day.
Top

One of the guys on my team is responsible for testing O365, so he scheduled a meeting with me today to do some testing in Citrix. That was supposed to start one minute ago, but he's over in our Exchange admin's area trying to figure out which accounts we should be using and moving them off O365 and back on-prem for initial testing.

This **** should have been done when he scheduled the meeting.
Top

What kind of animal reheats eggs in the communal microwave?
Top

the same one that reheats onions in the communal microwave.

I had to work out of our server room this afternoon because the smell was so overbearing. That was around 1230-1. It's now almost 530 and there are still traces of onion through the air.
Top

count2infinity
Posts: 22314
Joined: Tue Mar 24, 2015 2:06 pm
Location: All things must pass. With six you get eggroll. No matter how thin you slice it, it's still baloney.
Contact:
Contact count2infinity
Website

I bring my laptop to and from work everyday and also travel with it about once every other month. It's a 15.6" laptop. Anyone have any suggestions for a carrying bag? I'll probably use it as my personal item (I mostly fly united) when I fly, but more or less just looking for something for daily lugging of a laptop to and from work.

I currently have an Ohmetric bag that was gifted to me when I graduated high school. Pretty much looks like this: The latches for the shoulder strap squeak when I walk, there is pretty visible wear on the metal latches, it's not very comfortable anymore, especially when traveling. Overall it's just done it's duty (and then some) and is ready to be sent out to pasture.
Top

What kind of animal reheats eggs in the communal microwave?

I think I mentioned it before, but someone here uses the toaster oven to cook an egg. About once a week.
Top

I use a Swiss Gear Airflow backpack: 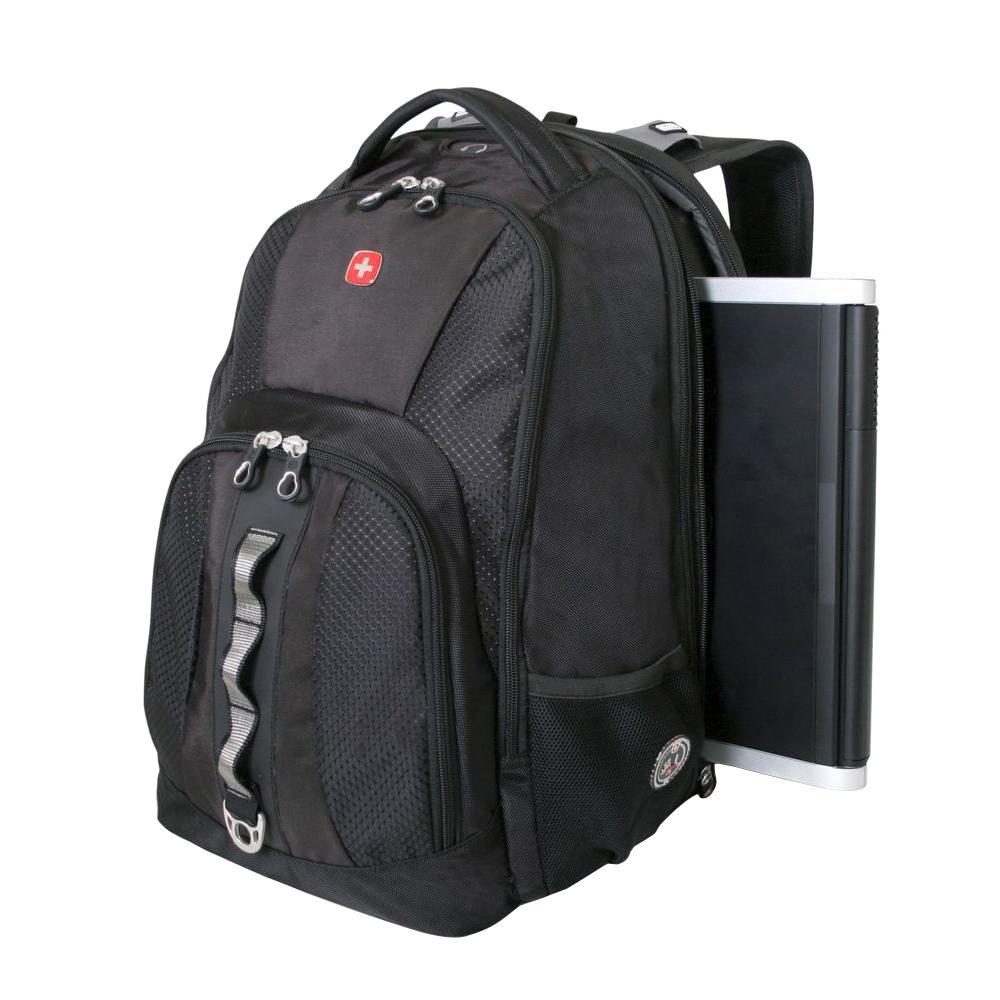 I carry my laptop in a regular Adidas backpack.... believe my laptop is similar size.

It looks almost the same as the one below. I think I got it for like 20$ on sale a year or so ago. Love the thing.

My wife uses a backpack for her laptop and stuff, as well. She bought the AmazonBasics one, which has held up really well thus far. Inexpensive, too.

Source of the post I use a Swiss Gear Airflow backpack