I’m very excited to invite your community to participate in Season 6 of the Mafia Championship.

The Mafia Championship is an annual forum-based tournament series that pits representatives from various online Mafia (aka Werewolf) communities against one another as they compete to determine the Internet’s greatest forum Mafia player. Each participating community democratically elects one person to represent them and be their “Champion”.

The tournament first started back in 2013. Since then, 270+ different communities and 50+ different nationalities have been represented.

It’s a super fun event that has created many new friendships and close bonds between communities. I hope that you would be interested in taking part

1. DO YOU ACCEPT THE INVITATION?

If your community wishes to participate, please confirm your participation to Thingyman as soon as you can to ensure yourselves a spot. Currently, the plan is to accommodate 187 communities this season (last season featured 170 communities), and if interest is high enough we will expand even further to 204.

If your community agrees to participate, the deadline for selecting your representative is April 26, but the sooner the better.

The tournament structure This year’s setup: Mad17
The setup is called Mad17 and features 17 players.

Each of the following 17 roles will be assigned at random to one player in the game without regard for the player's alignment. Each role is restricted to using its action only on the nights listed on the chart. 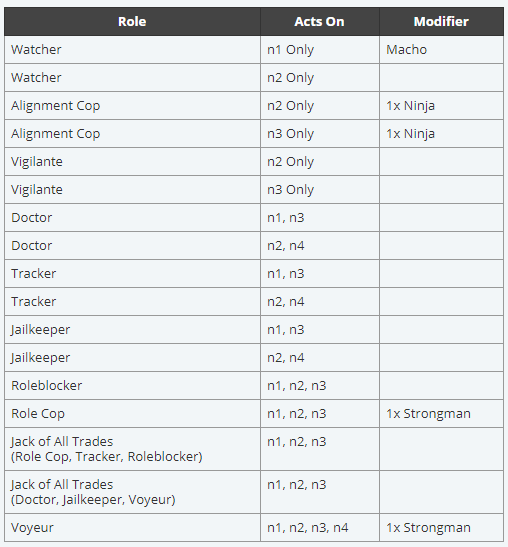 Relevant mechanics info
- Day start
- Role reveals at death are alignment only. You will not learn a player's exact role when they die.
- Majority is not in effect.
- Votes are automatically locked in at LYLO.
- Mafia factional kills are assigned. They can be tracked, watched, or roleblocked.
- Mafia share a factional Night Kill, which is a single standard shot for their faction.
- Mafia members may perform the faction kill in addition to their regular action at the same time.
- Mafia may communicate at any time.
- Tied votes will result in a player being lynched at random from among the tied players.
- Each individual player may make a maximum of 200 posts per day phase (this restriction is lifted 2 hours before day end).
- The game will have a host to oversee everything and make sure everyone’s following the code of conduct, but otherwise the game is completely automated (automatic votecounts, thread locks and reveals roles automatically, the bot receives and processes actions, etc.).

There will be 11 Qualifying Games, and your representative plays in just one of these. They will have start dates during the months of April, May and June. So in other words, as long as your representative can play sometime during that period, they should be good and I’ll make sure they get scheduled into a game that suits their schedule well. I.e. if your rep is busy until June, that isn’t a problem.

Wildcard games will be played in July, and the Finale Game sometime in August/September (whenever we can work out something that suits everyone).

If you want to get in contact with me ASAP, you can find me on Discord (Thingyman#6075).

Thanks for sharing the invitation, Willie.

Deadline is in 5 days already, so not much time left. Is there anyone at all that'd be interested in representing Fifth Avenue?

Maybe even you, Willie?